The Villa Park Police Department was established by ordinance on August 1, 1927. From 1915 to 1927 the village had many different marshals that were appointed by the Village President for a term of one year. Some of those who served Villa Park in this capacity were: John Swanson, Daniel Elkins, Charles Kiser, W.Y. Hendron and George Rippenhagen. Another title given to the Marshall was that of "Dog Pound Master. He was responsible for the apprehension of stray dogs and those without licenses. He was compensated for this additional task with 50% of the license fee or the entire penalty.

On May 17, 1915 the Village Board discussed the possibility of purchasing a "first class" revolver for the Marshall. There had been several complaints of "promiscuous shooting" in Villa Park and the board members felt the Marshall should have a gun. A secondhand revolver was finally purchased on June 18, 1917. Bullets were purchased several months later.

Officers patrolled the town on motorcycles during the early years. If they were needed back at the station, a spotlight located on top of the water tower was turned on. If any major problems occurred the DuPage County Sheriff's Police were called to assist.

In August, 1927 Charles E. Singer was appointed Chief of Police. He was a man of wide and varied experience capable of safeguarding the interests of a fast growing community. His prior experience included three years on the Chicago Police Department, ten years in the Sheriff's Office and one year as a Texas Ranger. His appointment as Chief was for a two year term. One of his first acts was to organize a police reserve of twenty men, three of whom were on duty every night. Motorcycle Policeman Fred Keppy and a night Sergeant constituted the paid personnel of the department.

In 1929 the police department held a benefit dance. The proceeds were used to purchase a squad car which was delivered in 1931. The car was painted canary and black and was fully equipped. It was reported to be one of the fastest police cars in DuPage County, capable of traveling 85 miles per hour. The equipment included a bullet proof windshield, gun rack, fire extinguisher, first aid kit, radio set, machine gun, gas guns, tear gas bombs, riot guns, a fingerprint outfit, and even a stretcher for unfortunates. The car was given the final touch when a large metal gong was attached.

By 1931 the police department had five full time officers including a Chief of Police, Sergeant, regular Officer, and two Desk Sergeants; each working a 12 hours shift with one day off every two weeks. Their duties consisted of patrolling the village, taking the census, answering complaints, posting and removing contagious disease signs, fumigating houses, keeping records and watching houses during the owners absence. They would also meet the CA&E trains arriving after midnight and check to make sure the people getting off the trains had legitimate business in town and gave some of the late comers a ride home. In 1931 Villa Park had the lowest crime rate of any town in DuPage County.

On February 6, 1941 the Villa Park Police took delivery of a new combination squad car and ambulance. It was similar to the vehicle previously operated and also contained a removable stretcher and other emergency first aid equipment- all built into a 1941 Ford 85 horsepower coach. The large trunk was used for a new two-way radio system.

Taken from: Reflections 1976 ( Pages 75 and 76 )
Courtesy of the Villa Park Historical Society 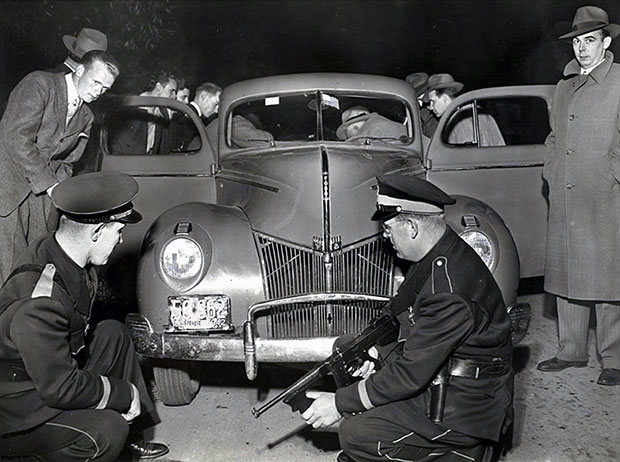