Senior of the Year Awards

The Senior Concerns Commission is requests nominations annually for the "Senior of the Year" awards to be announced at the annual Senior Fair in the beginning of May.

To be considered, he or she must be 65 years of age or older and a Villa Park resident. More specifically, the commission is looking for someone outstanding who expresses care for the community and their neighbors – someone who makes a difference.

To nominate, provide a paragraph detailing why the senior is exceptional with a first and last name and contact information. This can be mailed, emailed or communicated over the phone. 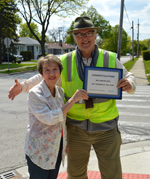 Congratulations to William Nolden who was nominated and awarded as the Senior of the Year for 2017 by the Senior Concerns Commission.

Nolden has been a crossing guard for about nine years starting at North School and now at Ardmore School. He heavily participates in the Villa Park Police Department's "Drug Take Back Program" where citizens can safely dispose of prescription drugs twice a year.

Nolden has also been on the Fire Pension Commission for about ten years and is a member of CERT, Citizens Emergency Response Team. He volunteers for various Village activities like the Sunday Movie Matinee at the library and Summerfest, and he even helps with directing traffic when needed.